While World of Warcraft is more than just a game, it is still a game at heart. From a gaming point of view, let's first look at what there is for a parent to appreciate about the game.

The first thing that I usually mention to an older (or the parent of a) potential player, is that WoW is not a first person shooter (FPS), although there are guns - for some classes of players. It's not just another I-kill-you,-you-kill-me or kill-everything-that-moves game. WoW is not a "twitch" driven game at all; that is, it doesn't matter (as much) if your reflexes are less than cat like. WoW is a role-playing game or RPG. That is, you choose an action for your character to perform (after having chosen a target if necessary) and the character acts it out on screen. That action can be hitting something with a club, throwing a lightning bolt, harvesting an herb or any one of hundreds of other actions. (Your character class, level and specialties determine which actions your character can perform. More about this later.)

Because of this, WoW can be played by those younger than would typically be successful at online games like Team Fortress 2 or the latest Call of Duty and just as well by those over the age of 40 whose reflexes may not be quite what they used to be. The oldest player that I regularly played with was in his 60's and retired. He was a dedicated, excellent player. Even so, WoW is not really an appropriate game for children under 12 or 13 to play without nearby adult supervision. There is simulated drinking and some sexual innuendo. The general text chat channel can sometimes be occupied by gamers with a potty mouth (or in this case, potty fingers). The game includes a language filter for chat windows, but it doesn't catch everything. It's nothing a child wouldn't see or hear in many music videos, but then, children under 12 or 13 probably shouldn't be watching those either.

Because of its easy-to-play nature, playing time can double as family time with WoW. Blizzard, the company that developed and owns the World of Warcraft franchise, has no problem with members of the same household playing together. Rather than just watching your children play, you can play the game with them. Playing simultaneously, however, requires multiple accounts and multiple computers which means doubling the monthly fee ($15 - or less) and the cost of the original software (which ranges from $20 to $70 with details to come below). I recommend initially that parents and children create their own characters and take turns on a single account until each players decides if the game is something they want to continue (or want their child to continue). Each account can have up to 50 characters.

It doesn't matter how easy a game is to play if the game is boring. Tic-tac-toe and the old video game, Pong can be mastered in under an hour, and both get old just as quickly (although I recall Pong seeming like hot stuff when I was young). World of Warcraft is very, very fun. What's more is that even after playing for hours, it stays fun. Blizzard is renowned for creating games that play solidly, with wonderful little details, and are just undeniably fun. The gist of World of Warcraft is to have the player-controlled character complete quests in order to get gold, in-game reward items, and experience (which allows a character to increase in level where new abilities are gained at every level). There are some quests that can get tedious such as gather 10 of these or 20 of those, but the majority are quite fun. Some quests are simply stunning. There are quests that are parodies of Star Trek, the Beatles, old Nintendo games and more. There are also quests that literally change the player's view of the virtual world. 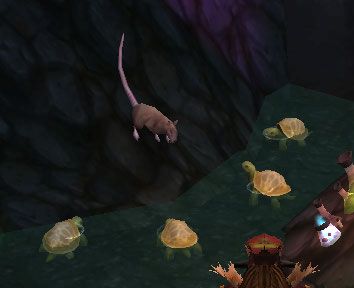 Taken at a leisurely pace, just completing quests and getting a character up to the highest level (85 at the time of this writing) could easily take months if not years. (I've also seen experienced players "level" an "alt" - a second [third or fourth] character in addition to their main character - from level 1 to 85 in 2-3 weeks.) In a talk given by Blizzard executives at the Austin Game Developers Conference (AGDC) in September, 2009, they mentioned that the original WoW (which will allow a character to advance to level 60) has over 2,600 quests. The Burning Crusade expansion (with new areas to explore, new character abilities and a top level of 70) added an additional 2,700 quests and the Wrath of the Lich King expansion (top level of 80) added 2,300 more. There is no way a typical player can or will do all the quests. With some exceptions for quests that are required for every player or required by a certain class of player, if a quest too tedious and boring, the player can drop it and choose another.

This is a good time to mention one thing that sets Blizzard apart from their competitors; Blizzard listens to its subscribers. If a number of players complain a particular quest is too tedious to complete - because the rate at which the necessary items can be obtained is too low, for example - Blizzard can and will increase the rate (or make other changes). They are also very good at investigating and fixing bugs encountered when doing a quest. More recently, Blizzard has taken steps to make leveling easier by dropping the amount of experience required at each level and by increasing the amount of experience gained for most quests. Some areas are slow to travel though without a mount such as a horse, a ram, etc. In order to remove the tedium of having to run long distances, the level at which the first mount can be purchased has been dropped from level 40 when WoW was first released to level 30 later on and is now level 20. The game has other means of transportation for getting around the world quickly, but those don't take one everywhere one needs to go. I mentioned in the intro that my kids played Everquest and Star Wars Galaxies, but I never did. The reason was that I saw how the game often frustrated them. It didn't look like fun to me. Eventually, it caused them to lose interest and quit. Blizzard has done a great job at avoiding those pitfalls and fixing problems as they arise.

One example of how Blizzard listens to their subscribers in WoW