One characteristic of Massively Multiplayer Online Role Playing Games (MMORPGs) such as World of Warcraft is the constant community of others.  You are never really playing alone. In WoW, players often login just to text chat with friends more or less the same way they use cell phone text messaging. The real fun starts at about level 17. There are special places within the virtual world that players can attempt in a group or party. The party size is 5 for the lower levels, but grows to 10 or even 25 players at the higher levels. A 10 or 25-member party is called a "raid group" or just "raid." The places that a party or raid attempts to conquer are called "dungeons" or "instances." "Instances" is a better term since only a few of the locations are actually dungeons, although most are inside something - a cave, a castle, a mine or a sunken temple for example. These instances have much more difficult enemies, which players at the appropriate level could not defeat alone; they must work together for the common cause. Players also have to defeat one or more bosses along the way that reward players better items than they would get from questing alone. (Click on any of the images with a bluish border to get a larger version.) 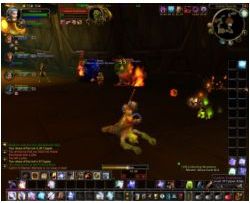 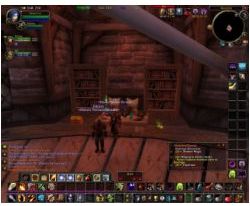 In addition to instances, there are also group quests - generally outdoors - that are easier to complete a party of two or three players at the appropriate level. If you have a child joining WoW to play with a few real-life friends, they may have a "built-in" party for doing instances and group quests, but often a group will need to pick up a random individual (with a particular specialty) to complete the group. I made a number of online friends this way and "ran" a number of instances with them later. Some of those instances became my favorite moments in the game. WoW has a way to keep a list of players as friends (as well as a list of players to ignore), which can be used later to tell when those players are logged in. Players can send a private text message to any other player in the game (called a "whisper") in order to ask if they'd like to try an instance run.

As you might expect, getting together a group of 25 people with the proper mixture of abilities to be successful in a larger, more complex instance doesn't happen randomly - at least, not well. Most players at some point will join a guild. A guild is just a group of players that play together regularly under the same guild banner (name). With a guild, there is a special guild text chat. The guild chat is active regardless of where the player is in WoW (unless the player chooses to shut it off or ignore it). Guild chat is a great way to ask questions about a quest that's proving illusive, to ask for or offer help, to organize raid groups for an instance or to just talk about the news of the day. The guild bank is a guild community storage area (found in the larger cities in the game) where members of the guild can place items they find or produce or get items they need. Every guild has one or more guild officers. They can determine who in the guild has what sort of access to which parts of the guild bank. Higher-level players can leave items that up-and-coming players will need for certain quests. It also becomes a storage area for items needed for raids and some rewards from instances. 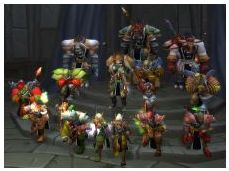 Guilds are fairly self-policing. While WoW has tools for starting and maintaining a guild roster, the game does nothing to enforce or require a guild. The officers of a guild invite new (un-guilded) players to the guild. They can kick unruly players from a guild as well. A player is free to leave a guild at any time. However, players that wish to successfully advance in the 10 and 25-person instances really need to belong to a guild to do so. Guilds help provide consistency and promote the right mix of other players needed to complete an instance. Most instances require many attempts to work out a successful strategy to defeat the various "bosses." That strategy can only be successful if the players understand it and know each other's play style. A guild has to fairly reward the guild members in order to keep them happy. Players need to play up to their ability and treat guild members well in order to remain in good standing. Defeating a particularly troublesome boss for the first time with 9 or 24 other guild-mates is a particularly euphoric and rewarding experience on par with winning the "big game." The A-Team's Hannibal had it right when he said, "I love it when a plan comes together."

If your child isn't interested in playing in a group, they can play from level 1 to the maximum completely alone. I have done exactly that when I wanted to create an alternate character (called "alts") quickly. They won't be able to go into instances appropriate for their level. They could, if they wished just to see the content, go alone into an instance significantly under their level and generally do just fine. For example, they could go alone into a level 17-20 instance when they are level 40. There are some parts of some instances that require more than one player to advance though. Very few of the items they would receive while in such an instance would be of any use to them (except maybe to sell in the auction house). Such a player should understand that when they reach the top level (called the "level cap"), there won't be much left to do. They could complete outstanding requests or return to do quests they'd not done earlier (even if those quests are significantly under the player's level), do recurring daily quests, play in the battlegrounds and/or arena instances (although that's not done alone). There's really not much else. This isn't necessarily bad because as mentioned before, reaching this point could take months or years. After that, the player could try a new character class as different classes play quite differently. The same quests need to be approached differently by different classes that have different abilities. Also, most classes have special quests for only that class. If a player reaches the point where they feel they've done it all, they can choose to suspend their account. Their characters and all the character's items are placed in limbo. They are no longer able to play nor are they charged the monthly fee. When a new expansion is released later, that player can reactivate their account and start from where they left off.

Some players prefer the player versus player ("PvP") style of play of Call of Duty or Team Fortress 2. Others prefer player against computer-controlled characters, which is called "player versus environment" or "PvE." WoW supports both styles of play. World of Warcraft has two main "factions:" the Alliance and the Horde. As you would find out from the in-game lore, these two factions are sworn enemies. To support the two styles of play, there are two main types of servers: PvE and PvP. On PvE servers, players from opposing factions can only battle in the battlegrounds instances, certain "contested" areas of the world or when both explicitly decide to battle (almost anywhere). On PvP servers, any player can battle any opposing faction player (at any level) at any time with no warning in most areas of the world. Battlegrounds are special instances where a 10, 15 or 40 players from each faction (at or near the same level) battle each other. Some instances are won by conquering the other side's general. Others are capture-the-flag instances and in some, the players must control certain spots in the instances for the most time. 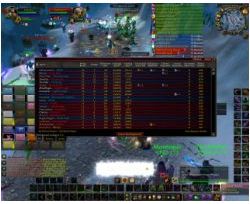 For those players that prefer a rated and laddered set of battles, WoW has an arena system, where two teams of a five players per team battle it out. Arena challenges are divided by "seasons," much like football or baseball. The teams have to be arranged and registered before their first arena match and more-or-less remain constant for the entire season. Based on a team's arena rating, they have access to buy special equipment - which is generally tailored to further PvP play.

Apart from the usual quests, Blizzard has a number of special events in WoW that are held every year. Many correspond to (but are not named the same as) popular holidays from various cultures such as Hallows End (Halloween) and Brewfest (Octoberfest). During these events, there are special quests that have rewards unique to that holiday (such as a special mount like a flying broom, the Headless Horseman's horse or brewfest RAM or a special pet.) Many of these rewards can be very helpful to players in other parts of the game. Some, such as the pet pumpkin, are purely whimsical. There is also a weekly fishing derby, the Stranglethorn Fishing Extravaganza. There are unique rewards from that as well. Very occasionally, Blizzard will also have one-time-only events. These often correspond to the imminent release of a new expansion pack and serve to bridge the lore from the existing world to the new content in the expansion. Even though they may happen only once, they are implemented with the same care that Blizzard shows throughout the game. 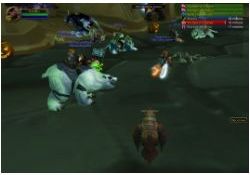 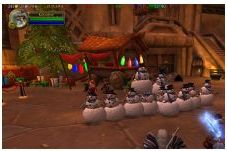