Now that you know how to open yourself up to attack in a civil manner, a few words of caution are in order. In ancient Internet times (i.e., 10 years ago or more), there were two approaches to how to set up a firewall. The first approach was to open all ports to all internal machines by default. In this approach rules were created to restrict traffic on those ports known to be "bad" or sources of trouble. This tends to make the life of system administrators easier because most traffic will be routed through the firewall by default. Unfortunately, as time went on and viruses and Trojan horses appeared using more and more ports, this approach became too unsafe.

The second approach is to close most or all ports by default and open only those known to be reasonably safe. This makes the system administrator's job tougher because every new service that their organization wants to offer to users on the Internet or services on the Internet to which the organization's internal users want access will often require rules to be added. However, it is much safer from a security standpoint. Because new viruses that exploit different weaknesses of operating system services found at certain ports and Trojan horses that use different ports than previously known ones, opening ports without a good reason is just a bad idea. All home office/small office routers I have used thus far have adopted the second approach by default, but can be made to operate under the first approach simply by opening large ranges of ports in the rules table.

You might be surprised to learn that your personal computer is most likely a server. No, I didn't say if you have a Windows Server 2003 machine or the like. I'm talking about any right-out-of-the-box, plain-Jane, straight-up PC you can get at Best Buy. Remember that whole topic about connecting up your home PCs so that you can share files, printers, and the like? Guess what? Doing that also makes them servers in every sense of the word. The File Sharing and Printer Sharing services are just that - services. If you share a folder or printer from your machine to other machines on your network a service is started and begins listening on a port on your machine for requests from other machines just like an Internet web server waits for requests for web pages from your browser. If you want to see this for yourself, open a command prompt window and type netstat -rn as the command. You will see something like the following screen. 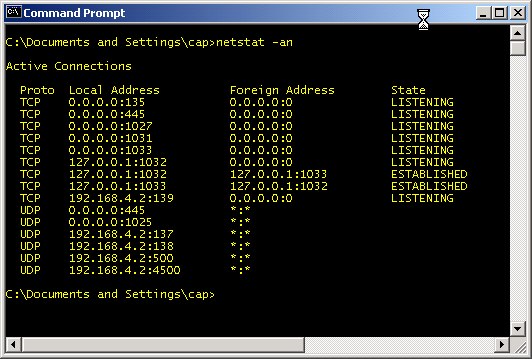 Any of the port numbers given above (i.e., the number after the ":" such as 135 and 445) are services waiting for commands. TCP and UDP ports 135 - 139 and 445 (and according to Microsoft, port 593) are used by the Windows file and print sharing service. TCP Port 1027 is used by Microsoft's Internet Connection Sharing service and the Internet Firewall. UDP Port 1029 is used by Microsoft's Local Security Authority (LSA), which is used to verify and compare user names and passwords (as a part of sharing files and printers). The Sasser worm variants attacked this port and often caused the service to shut down. This in turn would cause the system to reboot itself as a security precaution. Hence, this is a good example of a port you don't want to make available to the Internet. The above list might seem like more services that you would like to have running, but, in reality, that list is about the shortest it ever gets. This particular computer was just rebooted and connected to a router with no access to the Internet when this screenshot was captured. It only gets worse from this point. If you are curious and want to further investigate any of the ports you see in your netstat results, check out the section Test 10: Using the netstat command and TCPView to Check Port Usage.

Your file and printer sharing server will periodically broadcast that it has services available and inquire about other services from other machines. I'm going to assume that you probably didn't intend to share your files or printer with the entire Internet. At one time, I logged unsolicited requests from the Internet that reached my router. I saw Windows machines doing just that many, many, ... many, many times. It was so bad, that I stopped logging all the generous attempts of Windows machines on the Internet to give me access to their files and printers. The amount of this traffic varied from hundreds to thousands per day. I no longer see this traffic at my router, so I believe that ISPs have wizened up and now filter it. That and most people do have router/firewall products in place.

There are certain ports you should never open. Hopefully, it's obvious that the ports mentioned above - TCP & UDP ports 135 - 139, 445, and 593 - should never be open either going to or coming from the Internet. The table below lists ports that should generally not be open to inbound traffic. This means that you should be wary of adding rules to your firewall that allow Internet traffic through to any of the devices on your LAN over the ports listed.

I derived the above list from looking at the incoming Internet traffic that was logged as denied by my firewall. Then I went to Google and use the port and protocol as a search term (e.g., "UDP port 1434") in order to find out what the ports were (mis)used for. I find http://www.linklogger.com/commonscans.htm a useful source for such information as well.

From time to time, it is a good idea to check the security of your firewall. This is best done from an outside source trying to poke its way in. There are several sites that will scan your IP (i.e., your firewall) for open ports. Most of these do so to try to sell you products for security. One that exists just to try to further security (awareness) on the Internet is (Steve) Gibson Research Corporation's Shields Up!, which is a tool that scans your IP and tells you what you may have open that could be exploited. Click the Proceed button to get to a menu of scan types. I generally like all the first three: File Sharing, Common Ports and All Service Ports. It's good to get in the habit of running this tool regularly. Another good tool is nmap, but that tool is much more complex and probably beyond what most home network users can work with.

The DMZ Machine and Why It Is Evil

A De-Militarized Zone or "DMZ" machine - for the purposes of a home network - is one computer that resides at a static IP address on your LAN that has been designated to be fully exposed to the Internet. Normally, if the firewall receives a packet that does not map to a request made by one of the devices on the LAN, it just drops the packet. However, if a DMZ host has been designated, the firewall will instead route the packet to the DMZ server. That means the DMZ machine is potentially bombarded with requests from the Internet that it may or may not be prepared to handle. Many of those requests will be attempts to hack or infect the DMZ machine.

The security risk to the DMZ machine is high, so why would somebody wish to designate a DMZ machine? A good reason for having a DMZ machine is when you want a machine to be outside of the firewall in order to be a dedicated server (web server, mail server, Unreal Tournament 2004, etc.) and you are willing to isolate that machine from the rest of the machines on the LAN as much as possible. Unfortunately DMZ servers are usually used for a "bad" reason. Sometimes, it is very complicated to set up all the port forwarding firewall rules necessary for a particular game or other server. Some require three, four or more rules to be added. Some routers may not support the number and types of firewall rules that need to be added. Just designating the machine as a DMZ server seems like a good alternative because the work of adding those rules is avoided.

When you designate a computer as a DMZ machine, you've effectively placed it outside of the firewall protection provided by the router. Therefore, if you're going to have a DMZ machine, treat it as a leper. Assume it has been compromised the moment you attach it to the Internet. Don't store any sensitive data on it - up to and including reformatting the machine and reinstalling a fresh copy operating system before starting to use it as such. Only designate a machine as the DMZ machine if you are not going to use it for any other purpose. Install a software firewall with only the only open ports being those needed expressly by to the server and a few other services like outbound ports 80 and 443 (for http and https, respectively).