Every Tuesday in WoW is known as "Patch Tuesday." Blizzard has the option of shutting down the servers - all of them in a region such as the US or Europe - between 12:00 am and 5 am (PST in the US) every Tuesday for maintenance and upgrades. They don't always observe the downtime, and it is often shorter than the maximum time. (However, for major new releases such as a new expansion, the downtime can be extended to 24 hours and has gone as high as 72 hours at least once in the past.) A fact mentioned in the talk given by Blizzard executives at the Austin Game Developers Conference (AGDC), most of WoW's 180,000 documented bugs have been fixed. Rolling out those fixes generally requires the servers to be shutdown, the fixes installed and the servers restarted. The fixes may require the software on your computer to be updated as well. Sometimes those downloads are small; sometimes they are hundreds of megabytes. In the same talk, Blizzard mentioned that at that time, 4.7 Petabytes of data had been downloaded. If you happen to live where there is measured Internet or a cap on the amount of data you can download, this can be a real issue. This isn't an issue for most of the US Internet users. (Click on the thumbnail below to get a sample of some recent bug fixes.) 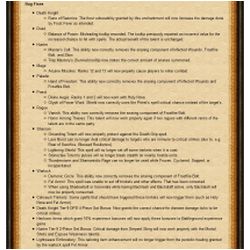 Bugs aren't the only things changed. Occasionally, Blizzard does "fix" classes to bring them up (or down) to par with each other. This has the effect of making some classes less effective than they were and others more effective. The reduction of class' abilities is called "nerfing" after the popular Nerf brand of foam toys (that hurt less than the real thing). An increase in abilities is called "buffing." Most of this balance is to make all members of a group in a battlegrounds or a raid instance have a reasonable effect on a group. It's a very delicate balance with a lot of interweaving of abilities to make an effective group. The good news is that if your child picks a class that they don't think is performing as well as other classes with similar duties/roles, they might get a "buff." The bad news is that they are just as likely to get a "nerf." Even more likely is that occasionally Blizzard changes the game mechanics in such a way that certain attributes that used to be important to a particular class for a particular role may be combined or switched to another attribute. A lot of the research I mentioned above has to do with maximizing the proper attributes for a given class. Sometimes it takes considerable effort to do so. It can be disheartening for a seemingly arbitrary change to make that work a waste of time. When and if this happens to you or your child, it can be a good lesson about life, but a player has an option of putting up with the change, switching to a new specialty with that character or switching to an entirely new character. 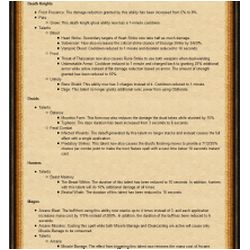 The higher-level instances can really only be defeated with a team of 10 or 25 players (depending on the instance) that are playing in concert. Because of real life schedules and commitments, a guild can't have just 25 members for 25-person raids. Having 25 individuals with the right mix of abilities on hand at every raid time translates into a need for something on the order of 40-50 members or more. Any time that many personalities are brought together, there's going to be some clashes. This is commonly referred to as "guild drama" and those that cause repeatedly cause such strife are called "drama queens." Generally, it's not too serious, but I've witnessed the breakup of several guilds as a result of drama.

WoW is a game at its core, but its players take it very seriously. Almost all guild drama starts with someone feeling they have been unfairly "robbed" of some item that comes from defeating some character in some instance. (Getting an item from a defeated character is known as "looting a drop from a mob" where a "mob" is any mobile character controlled by the computer.) These are usually items dropped by one of the instance's "bosses." We've vaguely referred to bosses before, but the definition of a boss is a uniquely-named character that appears only one place in the game and requires a combined effort to kill.) Before you join or your child joins any guild, find out how the guild does "loot distribution" and raid (instance) invitations. There are many ways of distributing the spoils of war, but any guild worth their weight will have a very well documented and implemented method of doing so. One term you will hear is DKP, which is short for "Dragon Kill Points." Most loot reward systems involve some method of earning DKP for raiding with the group and some way to spend it on items that come from defeating enemies. I've seen some mechanisms that are fairly simple and other that rival rocket science. The most important thing is that the reward system be established and rigorously followed. (Click on the link to see an example roster with DKP as taken from the demo at WebDKP.)